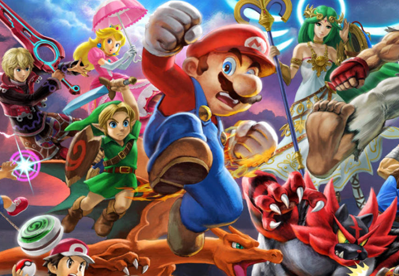 Crews will have 7 minutes from the end of a match to declare your next player. That player must then join the arena with 5 minutes or the offending team will lose a stock. An additional stock penalty will be applied every 5 minutes.

All crews and players must be registered at start.gg.

A LAN adapter is not required to participate, but anyone found to have a poor connection may be lag tested. If someone has a bad connection during the lag test, they will be disqualified.

This League is not region locked, anyone can enter from anywhere and players can not be DQ'ed for distance-based input delay, only lag spikes.

You are required to join the GGtoor server for the tournament: https://discord.com/invite/GUhyZxFH8Q

Must be 13 years old or older to play.

For daily SBU content, you can also visit the Allstar Combat server: https://discord.gg/nbzfNJYmHv

We will be using the Allstar Combat stagelist.

Crew Battle Rules
Minimum 5v5 (Maximum 10v10) Leaders choose CB size
Playoffs Cbs will be 8v8
10 min timer
No hazards
No items
Other miscellaneous rules can be found below in the rules section.

The goal of the ASC is to create a fun, engaging and welcoming environment. In order to make this possible, mutual respect between competitors is a must. Under no circumstances will poor behavior be acceptable. See CONDUCT Below.
Cheating

If any player is determined to be cheating, they will be subject to any punishment as determined by the ASC Staff. Cheating includes any behavior to attempt to gain an advantage unfairly such as spying, alting to learn information, lying about the results of a crew battle, sending in players under a fake name, and other means to bypass the general standards of a crew battle.
Player Send-In Rule

✯Crews will have 5 minutes from the end of a match to declare your next player. That player must then join the arena with 5 minutes or the offending team will lose a stock. An additional stock penalty will be applied every 5 minutes.
✯If those 5 minutes pass without a player being declared, crews will forfeit a stock.
✯Crews will lose another stock every 5 minutes a player isn’t declared.
✯Staff will be monitoring all league play and will make a decision where necessary.
Lag Rules and Procedures

If there is lag during a crew battle, crews are expected to abide by the following procedures: ✯If players request a lag test, ASC Staff will ask for proof from both competitors that they are on a wired connection, if one or both players are not on LAN the offending crew(s) will receive a 1 stock penalty, and will have the ability to sub in a new player using the same character as the offending player. The substitute may not be someone who has previously played in the CB. If you substitute you cannot play later in the CB.
✯If both players are found to have a wired connection, staff will hop into the arena with sable detect and lag test the players.
✯ASC Staff will open an arena and have both players join, the two players will conduct a 60 second button check, at the end of the 60s period staff will issue a ruling.
✯ If two players are unable to connect to each other the counterpicking team may substitute in a replacement.
✯ You cannot request a lag test after a game has been played out.
Lag at Start of Match

✯Step 1: If there is lag at the start of the match SD immediately.
✯Step 2: Follow the Lag Procedures section. If both players pass, retry the match.
✯Step 3: If the lag persists, please contact an ASC staff member for assistance.
Lag During the Match

✯Step 1: If there is lag in the middle of the match please taunt then SD.
✯Step 2: Follow the Lag Procedures section. If both players pass, retry the match.
✯Step 3: If neither player is lagging reset to same stocks & percent.
✯Step 4: If the lag persists, please contact an ASC staff member for further assistance.
Neutral Start Rule

Players must always start a match under neutral conditions. This means both players must start with no advantages (including but not limited to Hero RNG usage, Samus Neutral B Charges, ROB top spins, no invincibility on start up, etc). Players must also TAUNT or Crouch Spam to signify readiness.
League Format

✯The league will run for 4.5 months on a ELO based system and the top 16 crews going in a single-elimination bracket playoff setting.
✯Tiebreakers will be conducted based upon overall record, then head to head, and finally stock differential.
✯For any scheduling issues please contact ASC staff, if staff isn’t contacted any unreported scores will count as a loss for both teams involved. ✯7v7 Mínimum for Crew battles to take place.
✯ All PLAYERS must be verified in order to play. If an unverified player plays the team in question will be DQ from that crew battle.
Rosters

✯Each crew can have no more than 60 players on their roster at one time but will require at least 20 to register.
✯Players cannot be on multiple crews at the same time.
✯Players MUST be on your roster in order to play in the league and be flaired 12 hours in advance prior to the CB.
✯Both leaders can agree to let players play earlier than the 12 hour cooldown.
✯ If a 12 hour cooldown player was sent and both leaders did not agree to letting them play then the team that sent in the player will forfeit 3 stocks. If it happens 2 times within the same CB the team in question will forfeit the CB. It is your responsibility to keep track of your rosters so please pay attention.
✯Matches will be a minimum of 7v7, opposing teams can increase the amount of members per crew battle if they both agree to it.
✯30 or more members requires them to play 33% of those members each month.
✯Rosters will be locked in before playoff bracket begins!
Miscellaneous Rules

✯ Disconnections: If a DC happens, the offending player loses a stock. If a player DCs multiple times, they forfeit their remaining stocks.
✯If a player has to leave during a match the team may select a replacement to play out the leaving player’s remaining stocks, they must play the same character as the person who left.
✯ If a team forfeits an entire match, there will be no stock differential penalty. However, if there is a tiebreak situation that team will automatically lose the tiebreak.
✯ Players are not allowed to be resent at any point during the crew battle.
✯Stage Counter Picks: Crews must lock in their player/character before stage counterpicking begins. There are three bans, the league will be using its own ruleset.
✯DC During KO Red Screen: If you DC during a KO screen, it will count as you lost that stock.
✯If any issues come up during league play, staff has full discretion to deal with it as they see fit.
Neutral Start Rule

Players must always start a match under neutral conditions. This means both players must start with no advantages. Players must also TAUNT or Crouch Spam to signify readiness. Failure to neutral start should be called out by the in-game players soon after the start - as with everything else, if the match is played out, the results stand.

In addition, characters below must do the following: Wario: Release waft charge, can’t have bike onstage Olimar: Use standard starting Pikmin lineup (Red, Blue, Yellow) ROB: Release laser charge, don’t charge gyro or have it onstage/in hand Robin: Get rid of Levin sword at start if on 3 stocks. Can keep Levin if starting with 1 or 2 stocks Pokemon Trainer, Aegis: Start the same character as the previous match E.g. if starting Pyra game 1, must start Pyra game 2 Miis: Reveal moveset before the match and after the stage is picked Random: Stay random and roll a new character each match (“True Random”) Voted in by leaders 9/25/21 Sora: Start with Firaga
Addtional GGtoor rules

AGE REQUIREMENT Players must be at least 13 years old to participate. Also see information about prizing for players under 18.

GAME MAINTENANCE If the game's servers are interrupted, we may suspend and reschedule the event to a future date.

CHEATING Cheating of any kind will result in disqualification without prizes from the event, and being banned from all future events. If you are in a match where you believe your opponent cheated, please send any evidence you may have to the tournament staff. In addition to Hacking, "CHEATING" ALSO INCLUDES USING ANY BUG OR UNINTENDED EXPLOIT THAT EXISTS IN THE GAME, intentionally or unintentionally - UNLESS Staff has made an announcement to everyone about an exception to this rule. If this somehow happens to you unintentionally, you should immediately alert your opponent and tournament staff - if you don't, you will be deemed to have been Cheating, and you will be disqualified without prizing and banned from all future events.

CONDUCT: Sportsmanlike conduct is expected. You are NOT allowed to be disruptive or harass your opponent on Discord, Start.gg, Twitch chat, etc (or any other actions that could be considered unsportsmanlike conduct except for actions intended to be allowed within the game itself as part of normal game-play.) If you do, then your actions may result in a game loss, match loss, or disqualification from the event without prizes, and/or ban from future events, solely at the discretion of the Tournament Staff.

STREAMING Select matches for this event may be streamed on one of our designated Official Twitch channels. Competitors playing in the event may live stream the event from their own POV as well (and are strongly encouraged to do so-if you do, please add "#GGtoor" to the title and don't forget a time delay so no one can stream snipe you!) By registering for this event, you agree that we may live re-broadcast your live stream from our designated Twitch channels and Commentate any game-play during the course of the event, as well as create VODs of this Content, which we may choose to make available on our official Youtube channels and other platforms, so others may marvel at your awesome plays (or epic fails!)

*ALL FIELDS ARE REQUIRED.

Sorry, but you are trying to sign up with an email already in our database. What do you want to do?