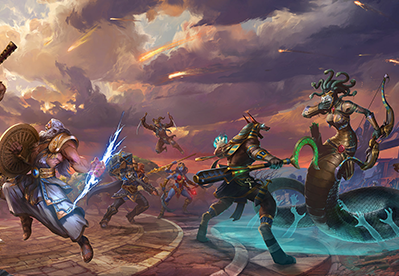 Registration to this event is FREE, and open to EVERYONE!

The Knockout Stage for everyone will begin Saturday, February 27, 2021 at 12 noon EST (9am PST/6pm CEST) with a cut to the Top 4 (Please see the rules for more details!)

Pre-Register NOW in order to secure your spot and get a chance to compete for fun, bragging rights, and a shot at the CASH PRIZE!

This event will be run in stages. The Knockout Stage will be held Saturday, February 27th, 2021, matches starting 12 noon EST. This matches for this stage are single elimination, and we plan to run this stage with Best of 3 (Bo3) matches; If more than 32 teams register, this stage might switch to a Single Game (Bo1) format.

The TOP 4 will face off on Sunday, February 28. This stage is Best of 3 (Bo3) and this stage will be live streamed. Top 4 will be played sequentially instead of concurrently, so all 3 matches (semifinals x2, and the Grand Finals) can be live streamed on one of our Official Twitch channels! (These matches will not be played at the same time/concurrently, like in the other rounds.)

Please note: Under normal circumstances, ROSTER CHANGES ARE NOT ALLOWED once the event begins. It is important you register your substitute/back-up players on your roster prior to the first round of the event, so you will be able to field a full team every game over the duration of the event (even if one of your main players has to leave, or if your games are held over the span of more than one day.)

Check-in for the event will open FOUR(4) HOURS before the event begins, here on Toornament.com (8:00am EST)
Check-in will close ONE (1) hour before, at 11:00 am EST. You MUST check in to participate.

ON THE DAY OF THE EVENT, AFTER YOU CHECK IN ON TOORNAMENT.COM, PLEASE JOIN THE #SMITE-CHAT CHANNEL OF THE DISCORD AT LEAST 30 MINUTES BEFORE THE EVENT STARTS, OR YOU MIGHT NOT BE ABLE TO PARTICIPATE!

It is important to stay in that channel for the duration of the event, to make sure you do not miss any important instructions from the tournament staff. You can find the discord at: https://discord.gg/GUhyZxFH8Q

TARDINESS: If your opponent appears to be non-responsive after 3 minutes, ping them AND the tournament staff via a post in the discord channel, alerting everyone that the opponent appears tardy. If your opponent does not respond/report in for the match within 5 minutes from the time of the first public ping, ping them AND the tournament staff again, and your opponent will be issued a game loss. (If a Best of 3 Series, then repeat this process, and they still do not respond within another 5 minutes they will then be issued a match loss.)

DESYNCS, CRASHES, or CONNECTION ISSUES: Should a player crash/desync/disconnect/soft lock at the point of the game at which it is not CLEAR that the match is "solved" (as in already decided at the point of the crash), the team with the player issue may have a 5-minute grace pause that will not take up any time away from their pause time to allow time for the player to return to the match. If the said player does not return the match will continue without the said player, however, the issue player will be allowed to return at any given moment. Once a disconnect happens teams MUST REPORT immediately at the general tournament discord by both match participants.

Select matches for this event will be streamed on one of our Official Twitch channels. Competitors playing in the event may live stream the event from their own POV as well (and are strongly encouraged to do so!) By registering for this event, you agree that we may live re-broadcast your live stream from our Twitch channel and Shout-cast any game-play during the course of the event, as well as create VODs of this Content which we may choose to make available on our official Youtube channels and other platforms, so others may marvel at your awesome plays (or epic fails!)

All Death Stamps and Titles are Banned

Items and gods can be banned with an admin’s discretion if it's found to have some sort of game-breaking bug.

Each team is allowed 3 Pauses Per Game.

One pause may go for 3 minutes.

If a pause time goes over 3 minutes it will then count as two pauses.

If a pause time goes over 6 minutes it will then count as three pauses.

Teams who break the rules will forfeit the match.

If a team breaks a rule and Forfeits the match, all players must cease the game and report to an admin.

Proof must be given that a team broke any of the rules given.

If a team sees that the team they are going against broke a rule, teams will be able to pause the match to get admin assistance and to file a claim within the #create-a-ticket channel.

The highest-seeded teams will host, highest being the lowest number.

Game 1 will be hosted by highest, Game 2 by lowest, and Game 3 by highest again.

The Host must make sure Conquest Draft Bans are on.

Players are to conduct themselves professionally within a game, spamming, indecent behavior, and any and all forms of toxic behavior will not be permitted and will be handled on a case by case basis by an admin.

Screenshots will be posted by both teams and done so by the captains.

If a team needs to restart due to any reason, both teams are allowed to restart the game once per game before the five-minute mark.

Other than that, please everyone have fun.

Matches: Best of 1 (check on game day if upgraded to Bo3)