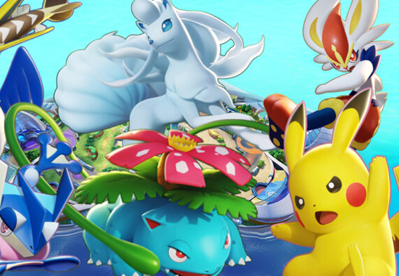 This online event will be free-to-enter for players from all over the world and will feature $500 in cash prizes for the top teams. Find all info and the sign-ups below and don't miss your chance at becoming a pro of UNITE!
Dates and schedule

Format Single Eliminations
Match format: Best of 3 games.
All matches will be hosted using the Tournament Mode, maxing all 4 options
Note Semi-finals will be played sequentially instead of concurrently (that means in the Top 4, one match will need to wait until the other finishes)
Grand Finals will be Best of 5 games
All games will be played through the Nintendo Switch or mobile devices
Players may submit their own scores.
Screenshots per game are not required but are recommended to help resolve issues when encountered.
Pokemon planned to be banned or restricted due to bugs happening in the game: None. PLEASE CHECK THE DISCORD FOR ANY UPDATED INFORMATION ABOUT BANS. BANS MAY BE ADDED OR REMOVED AS THEY ARE DISCOVERED OR FIXED.

We ask you to be in the discord servers at all times during the tournament: https://discord.gg/GUhyZxFH8Q and http://discord.gg/waCduKseTe

Registration ends a few hours before games start on Game Day. Be sure to pre-register early - don't wait until the last minute, or if any problems arise it may be too late to fix them!

Important Note: Players must be at least 13 years old to participate.

Make sure you've read the tournament's rules before joining:
Ruleset

To play in the tournament, make sure your team of 5...

Sign up here on smash.gg and complete ALL steps.

Make sure you have downloaded Pokémon UNITE for the Nintendo Switch or Mobile devices and have the latest version up and running.

Join the Discord servers: https://discord.gg/GUhyZxFH8Q and http://discord.gg/waCduKseTe. You must remain there at all times during the tournament, since the staff's announcements will be made preferentially at the #unite-announcements channel. All judge calls will be through smash.gg's integrated chat.

To be eligible to participate, a player must be at least 13 years old (or such other age, of greater, as may be required in such player’s country of residence). If your team has any players that are under 18 years old, you should follow the following: All players whose age is 13 to 17 must send a fully completed parental consent form signed by their parent or guardian to to Sinobii#0976 on discord at least 24 hours before the event starts, or the team will be dropped from the tournament. The required form is available for download during the registration process for this event. Alternatively, you can download the parental consent form after joining the GGtoor discord (above) from the GGtoor discord server's #resources channel. This is in compliance with GGtoor's Term of Service and as well as to avoid potential issues that may arise.

Do not forget to use the check-in within 1 hour before the event starts. If you do not check-in properly, you will be dropped from the event! You MUST complete all five of the tasks above before the tournament starts.

Please reach out to us on Twitter, Discord or by email for any issues.

Do not forget to use the check-in within 1 hour before the event starts. If you do not check in properly, you will be dropped from the event! Matches will be played using Pokémon UNITE for the Nintendo Switch or on mobile. The game is free to play and you will NOT need a Nintendo Switch Online subscription to download it from the Nintendo eShop. The tournament is open to players around the world and is free to join. Competitors will form squads of 5 players each. 1-2 backup players are allowed for all teams, but is not mandatory. However, be aware that teams having 4 or fewer players WILL NOT BE ALLOWED to play. All rounds will be played as a best-of-3 set of games (Bo3). The grand final will be played as a best-of-5 set (Bo5). All players are allowed to use a Battle Item and up to three Hold Items on their builds. We're aware of the disparities this may cause between players who have invested money into the game and those who have not, but there's no feasible way to limit or restrict this feature for now. We will keep this in mind moving forward in the future.

Players may only join the tournament in squads of 5-7 players. Five players are needed to play any given round, but all teams are welcome to fit 1-2 extra players as a substitute. If any team drops below five players, they will automatically lose their round and thus will be out of the tournament. Players not on the roster can not play for the team, and new subs/alternates can not be added to the roster after registration closes- be sure to pre-register your alternates, so your team does not have to forfeit if one of your main players is unable to play or continue in the event and you fall below 5 members! All squads will face each other on a single-elimination bracket until only the winning team is left.

Players interested in joining that do not have a squad should join the GGtoor Discord server and the Victory Road Discord server. Both servers have a specific room for solo players who are looking to form a new team!

Matches will be hosted (i.e created on the game) by the captain of each team as follows:

Game 1: captain of team A (appearing on the left side on the match screen). Game 2: captain of team B (appearing on the right side on the match screen). Game 3: coin flip by a staff member in the chat for the match. If your match goes to a third game, you need to call a staff member on your room to do this (click on the red button saying 'Report Match Issue'). In the best-of-5 set of the finals, games 1 and 3 will be hosted by team A, and games 2 and 4 by team B. The final game 5 will be decided on a coin flip.

While we are aware of certain bugs from time to time (such as there had been with Crustle, Blastoise, etc...), if the pokemon is not banned for the event, intentionally abusing such bugs can be sanctioned with disqualification.

Players will be allowed to stream their run of the tournament. The admins are in no way responsible for any stream sniping, should it happen. The admins suggest at least a 2-minute delay on player/team streams to completely avoid stream sniping. Players may share the streams of their run through the #tournament-streams channel.

We're using Spectator Mode to stream both Semifinals and Grand Finals We strongly suggest putting #VRClash and #GGtoor in the title or on your Tweets about the tournament. By registering for this event, you agree that we may live re-broadcast your live stream from our designated Twitch channels and add commentary on any game-play during the course of the event, as well as create VODs of this Content, which we may choose to make available on our official Youtube channels and other platforms, so others may marvel at your awesome plays (or epic fails!)

For each round, you must check-in at smash gg for that round. if your opponent doesn't show up within the first 5 minutes, you get a game win, start the match up 1-0 If the opponent does not check in within 10 minutes , smash.gg will automatically give the tardy player a match loss.

Due to the nature of the game, and unfortunately have no way to spectate or manually pause the game, we will follow this rule:

If a disconnection happen, any resolution will be disputed should both teams agree to remake the game. If a game in the current match was already previously restarted during the same match, or either team does not agree to re start the game, then the game must continue and not be started over. The tournament organizer is in no way responsible for the players' connection. Keep in mind that we're opening the tournament for everyone so ping issues should be expected.

If the event does not have at least 24 active teams participating, the event might be postponed to a later date.

Visit the GGtoor Discord for ongoing updates about the event: https://discord.gg/GUhyZxFH8Q

Each time you are paired against an opponent, you should use SmashGG chat to arrange a duel room. If you're having trouble with SmashGG chat, then use the ping a mod on the Discord channel.

Age: To be eligible to participate, a player must be at least 13 years old (or such other age, if greater, as may be required in such player’s country of residence.)

Select matches for this event may be streamed on Twitch. Competitors playing in the event may live stream the event from their own POV as well (and are strongly encouraged to do so! Please add #GGtoor to your tournament stream title.) By registering for this event, you agree that we may live re-broadcast your live stream from our designated Twitch channels and cast any game-play during the course of the event, as well as create VODs of this content. Any content we make may be made available on our official Youtube channels and other platforms, so others may marvel at your awesome plays (or epic fails!)