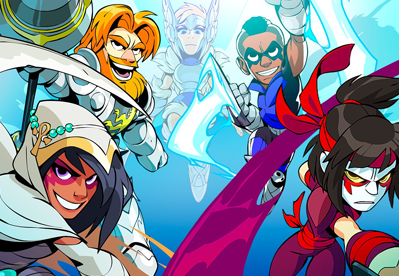 All events are double elimination, meaning that if you lose a round in Winners, you automatically get sent down to losers which means you can get a second chance to win!

Both Brawlhalla events are 1v1 and for Multiversus the NA event is 2v2 while the EU event will be a 1v1.

Brackets for each event are structured the same.

First Bracket (May have multiple pools depending on attendee count) -> Top 32 -> Top 8 (Which will be streamed on the GGtoor channel)
Where is the T.O? I need to ask him a question that is not in the FAQ or listed on the front page.**

Click on the drop down box below for our FAQ (Frequency Asked Questions), or if your query isn't listed here, DM Maximus#4536 on discord.

If you disconnect for any reason during a set, you can wait a little while for the issue to be fixed, but if it is more than 10 minutes we will have to DQ you and if you do not communicate with us we will DQ you.

There will be a pre-check in and you must Check in in every set you play. (DQ Timer is 10 minutes)

Visit the GGtoor and the PXL discord for ongoing updates about the event: https://discord.gg/GUhyZxFH8Q

Do not forget to use the check-in within 2 hours before the event starts. If you do not check in properly, you will be dropped from the event! Unsportsmanlike Conduct

(Opponent) No show rules: For each round, you must check-in at smash gg for that round. if your opponent doesn't show up within the first 5 minutes, you get a game win, start the match up 1-0 If the opponent does not check in within 10 minutes , smash.gg will automatically give the tardy player a match loss.

Each time you are paired against an opponent, you should use Start.gg chat to arrange a duel room. If you're having trouble with this chat, then use the ping a staff member on the GGtoor Discord channel for the game you are playing.

Age: To be eligible to participate, a player must be at least 13 years old (or such other age, if greater, as may be required in such player’s country of residence.) Players under 18 will need a consent form completed by a parent or guardian to claim cash prizing.

Select matches for this event may be streamed on Twitch. Competitors playing in the event may live stream the event from their own POV as well (and are strongly encouraged to do so! Please add #GGtoor to your tournament stream title.) The admins are in no way responsible for any stream sniping, should it happen. The admins suggest a time delay on player/team streams if stream sniping is of any concern.

By registering for this event, you agree that we may live re-broadcast your live stream from our designated Twitch channels and cast any game-play during the course of the event, as well as create VODs of this content. Any content we make may be made available on our official Youtube channels and other platforms, so others may marvel at your awesome plays (or epic fails!)

ALL DECISIONS BY THE TOURNAMENT ADMINISTRATOR OF THIS EVENT ARE FINAL.
Brawlhalla Rules

You can play any legend. (Unless during the tourney there is a new legend without a balance patch).

You must follow all official Brawlhalla community rules which can be found at https://www.brawlhalla.com/online-tournament-rules/

All matches must be played in the tournament mode and on the correct region.

Top 8 onwards will be played ON stream in Bo5 matches at https://twitch.tv/GGToor

Rick is a banned character.

Before playing every game, you will have to go to start.gg onto your match and select a map by striking!

Players are not allowed to start any game in before moderators say so. Any game played without a moderator's allowance is not counted. (This is to make sure all casters and the streamer is in the game room)

Since striking is now done inside startgg, players playing on streamed sets will have to manually report their scores and maps Players are to play in other tournaments at their own risk, Players have 5 minutes to show up after they after moderators call the start of the set. If they fail to do this, a moderator will DQ the late team(s)

Top 8 (Best of 5 matches) onwards will be streamed at https://twitch.tv/GGToor